In the early 2000s, the Port Authority commissioned Mijksenaar to develop a system-wide wayfinding standard, one that would ultimately be adopted by all PANYNJ airports and terminals. The system showcased the value of a uniform system across all the terminals within the airport, and became a global benchmark. Over the years however, many changes, from increased security protocols, additional ground transportation options, additional airline service offerings, and general changes to passenger flows conspired to a subpar experience. Even then-Vice President Biden described LaGuardia as being akin to a “third-world airport”.

As part of a significant investment into its aviation facilities, the Port Authority approached our design team to revamp its Wayfinding Standards. This provided a singular opportunity to refresh the Port Authority wayfinding system to provide a unified, cohesive, 21-century experience for all its airports.

We focused on imparting the bold, energetic and no-nonsense personality of the New York/New Jersey region into the passenger experience. The airport is but a part of a larger transportation experience, so we sought to align the airports to the region’s iconic transport vernacular to create a more seamless journey.

To that end, we commissioned a custom, backlighting-optimized version of Helvetica Now and created a set of pictograms to match. We designed a sign box that elevates signage from flat graphics to dimensional blocks of color, recognizable from more angles. They act as beacons to connect people to their destinations, enabling quick, subconscious recognition.

A grid-based, modular sign system now allows for precise sizing and scale of any element, depending on their proximity to the user and the type of information. This modular system also ensures that design teams working on the implementation and maintenance of the system can ensure consistency in disparate spatial conditions.

We went beyond the look and feel to improve the destinations being offered. A harmonized, airport-wide gate naming approach serves as a positioning tool for all users—especially connecting passengers—to understand and navigate their journey, from A10 to A12 or... E45. To mitigate passenger confusion, some destinations are renamed to be more descriptive: the AirTrain station “Federal Circle”, is renamed to “Rental Car Center”.

We expanded guidelines on digital technologies, anticipating that digital signage will be increasingly commonplace. Importantly, we took care to design the guidelines to be technology-agnostic: we did not prescribe specific digital touchpoints, but developed a design system flexible enough to accommodate both existing and future platforms. 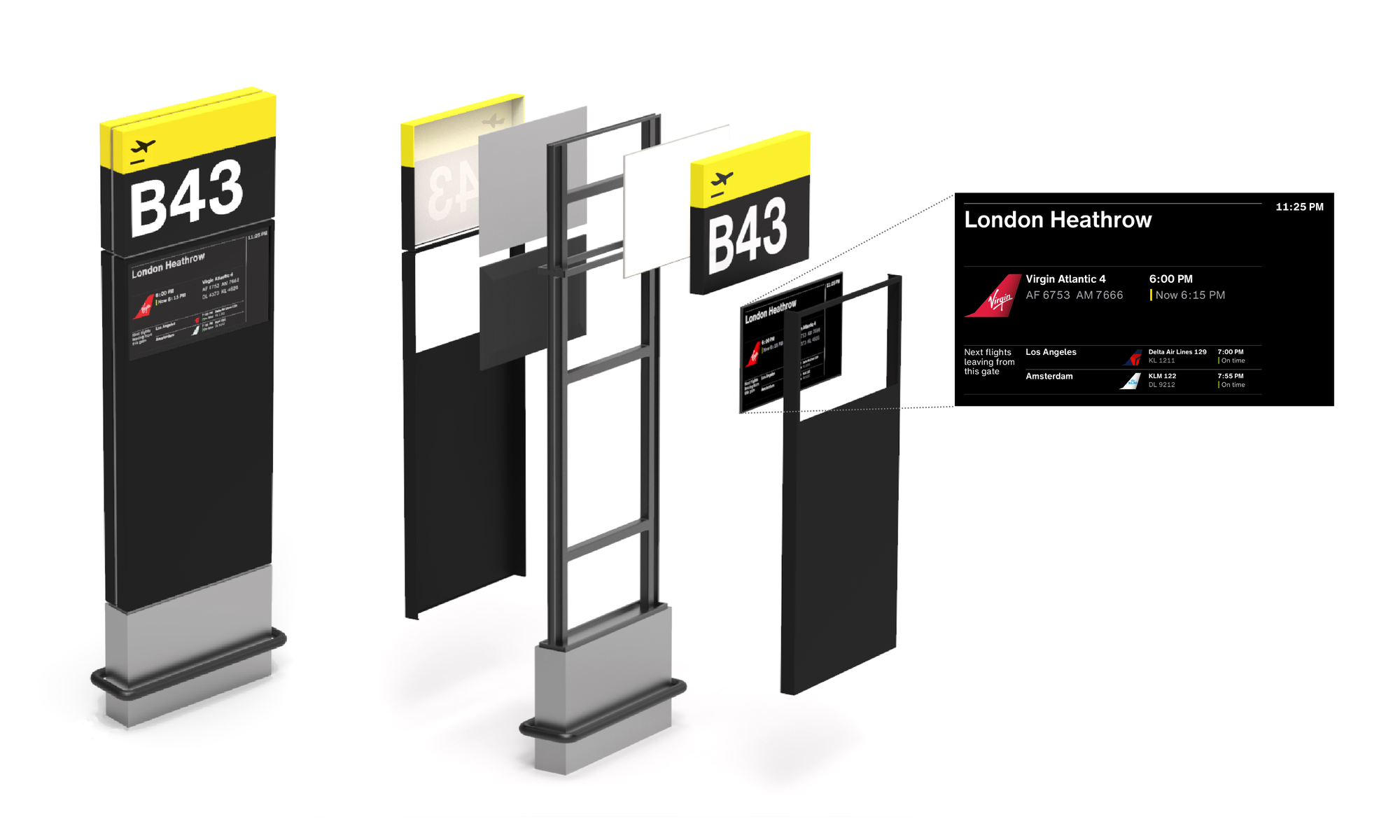 The design system was officially released to terminal operators, developers and designers in the fall of 2020. The principles set forth in the manual have been embraced and applauded for their clarity, comprehensiveness, and design sensibility. In the coming years, existing terminals will be retrofitted with the new standards, while new terminal openings, starting with the new Terminal A at EWR, to be completed in 2022, will be the first new terminal to incorporate the fully, internally-lit sign system. Terminal operators have already begun using the new standards for temporary signage during construction.

The Four Seasons Hualālai Resort in Hawai`i is more complicated to navigate than you might think. Ten pools, eight tennis courts, and restaurant after restaurant across nearly 1,000 acres make for quite the site map. Getting lost in paradise may sound enjoyable, but ensuring resort visitors could easily find their way around the property was a real challenge for Hualālai.

The app provides visitors an overview of all of the amenities, offerings, and events at the resort. It ties into concierge services, allowing users to schedule dinners, treatments, excursions, and even tee-time right from the app.

The app utilizes a custom, highly detailed, GPS-based map to help visitors navigate the resort, giving a sense of scale and distance. A set of custom icons, reflective of the culture at Hualālai, were developed to help identify types of destinations at the resort. 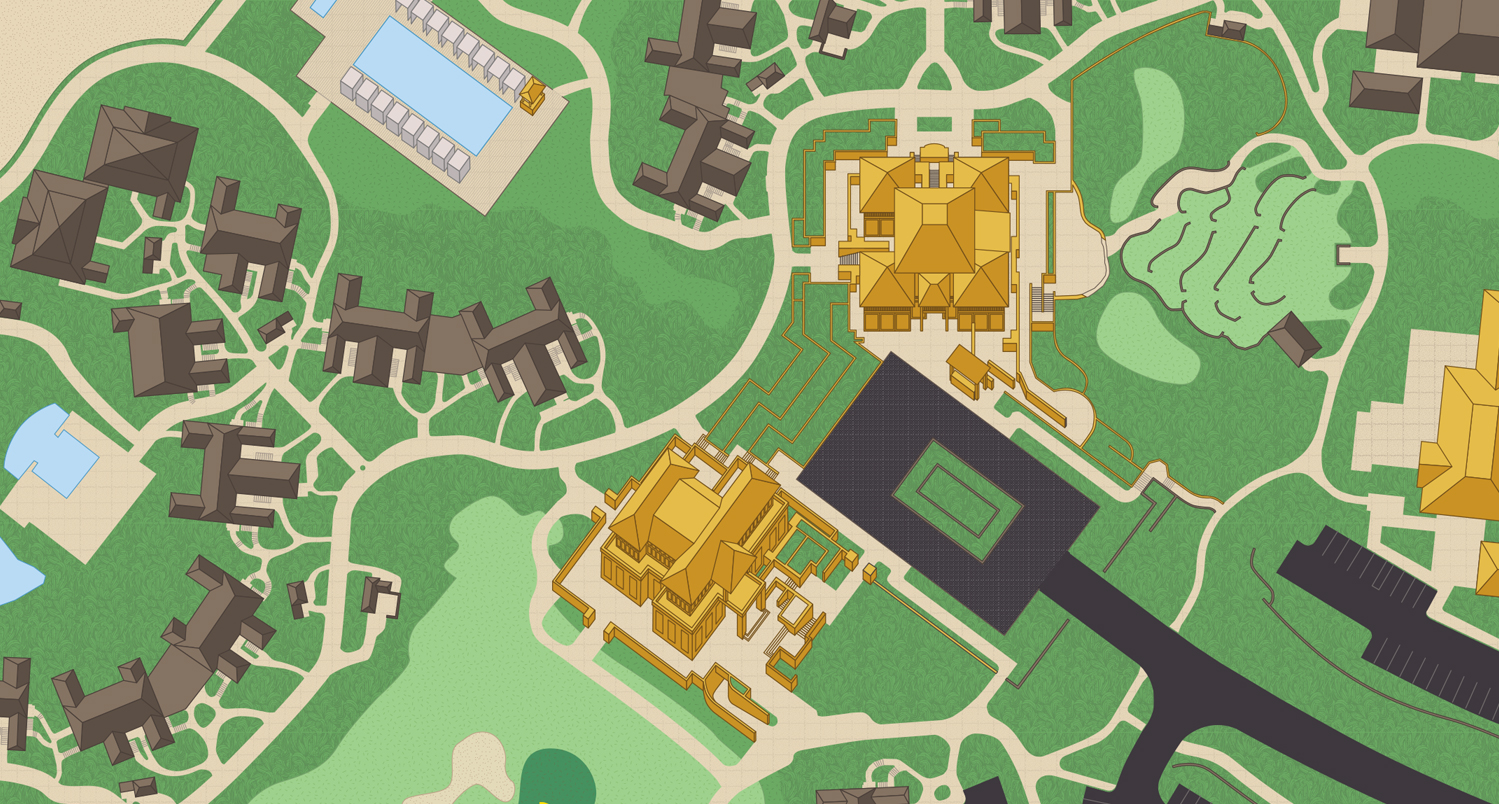 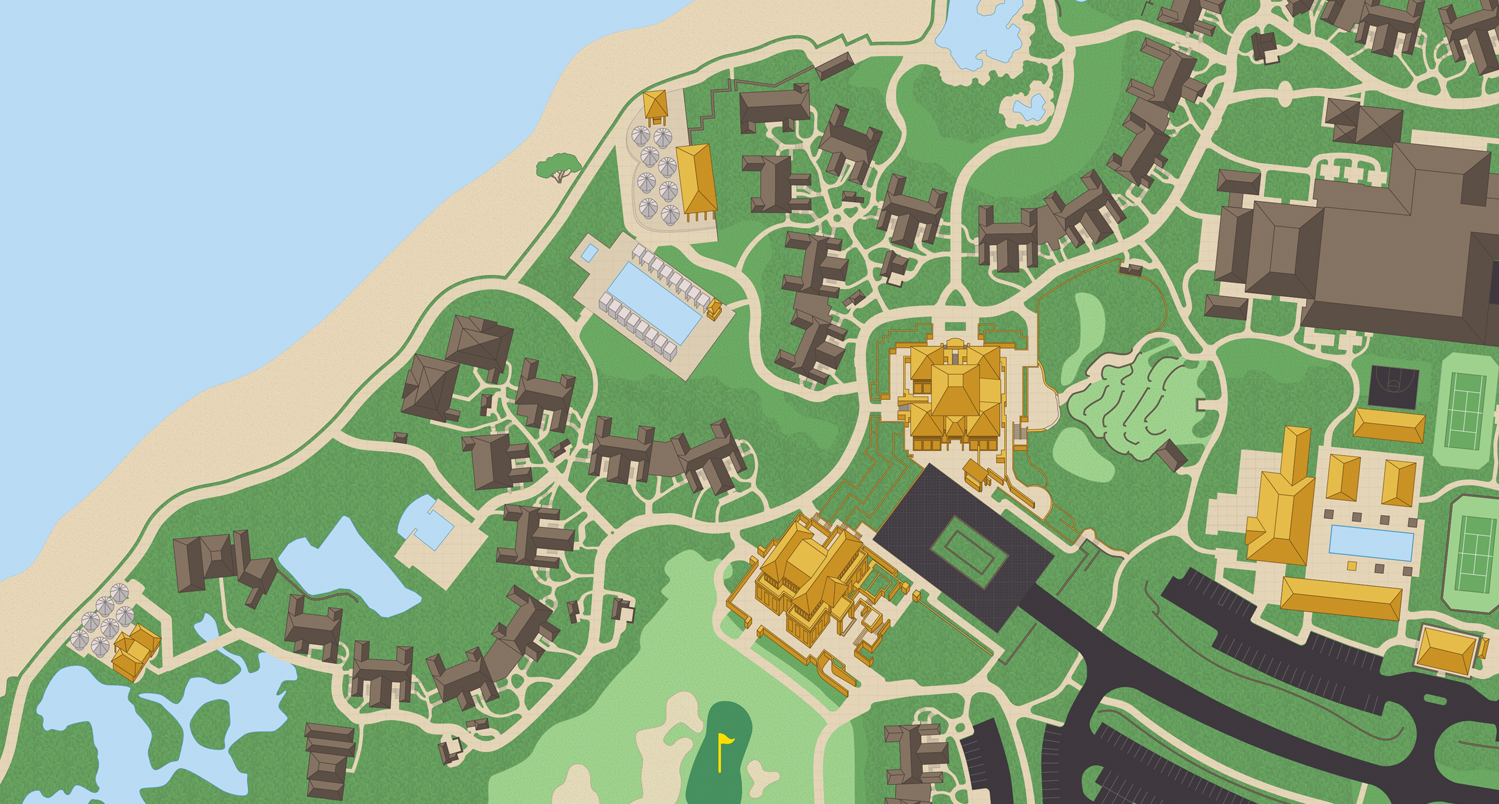 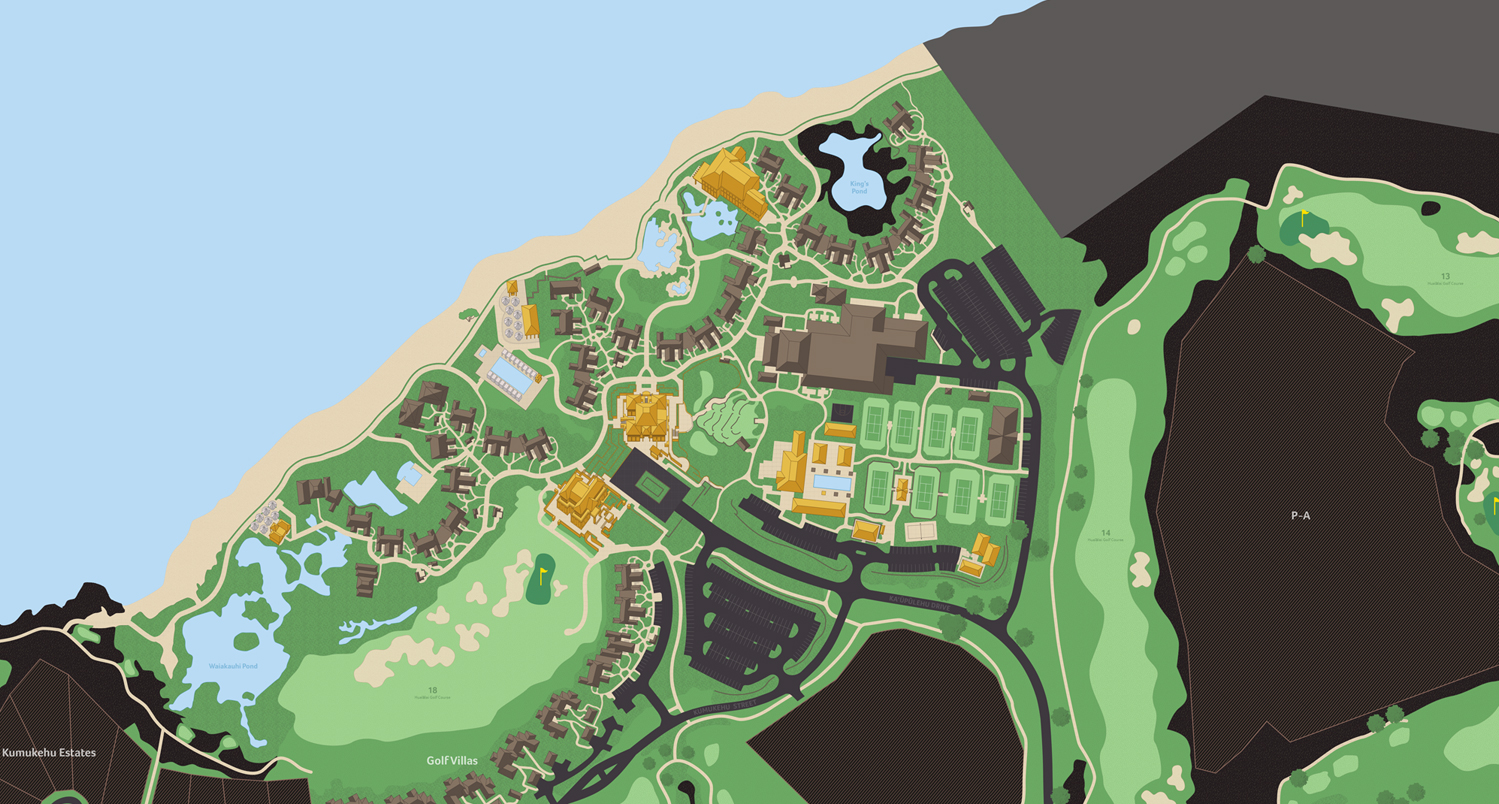 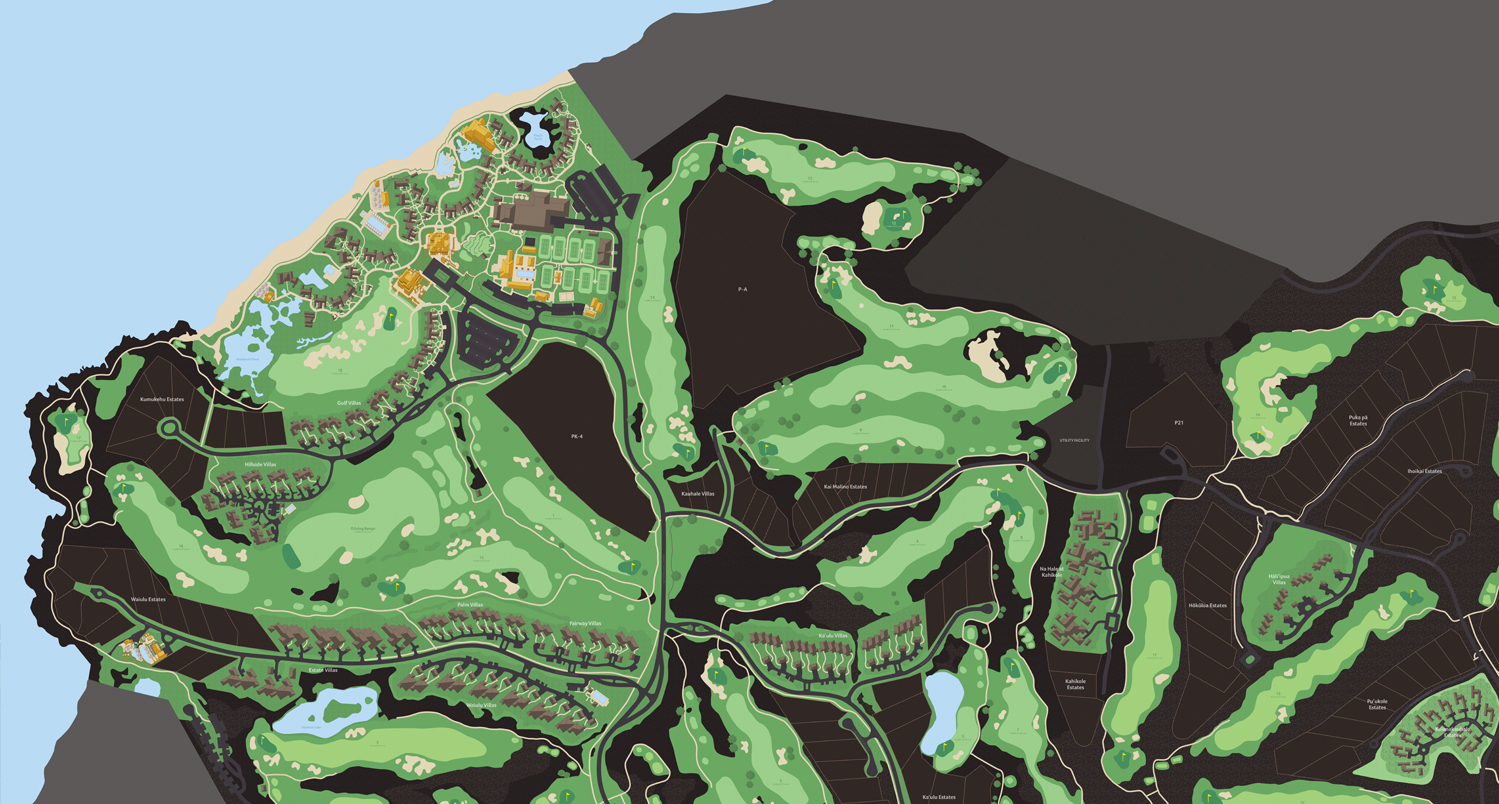 Our philosophy is to always let the user control the experience, and we achieved that with multiple zoom levels, layered content, and interactive touch points. We wanted to enhance the real-life experience of staying at the Four Seasons, not distract from it.